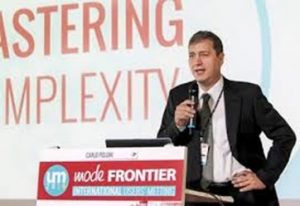 Dr. Carlo Poloni is a Professor of Mechanical Engineering at the University of Trieste and is the president of ESTECO SpA. He received his “laurea in Mechanical Engineering” in1987. In 1988 he worked in the space division of Aeritalia (Italian aerospace company) and from 1989 to 1992 he worked for Sincrotrone Trieste where he was responsible for the mechanical design of critical components of the synchrotron light source. During this period he started to use evolutionary algorithms in design applications.

From 1993 he joined Trieste University as a researcher and started to make Multidisciplinary Design Optimization the key topic of his research. From 1996 to 1998 he coordinated the development of optimization algorithms in the EU project FRONTIER.

In 1999 ESTECO was founded as a spin off company to develop and maintain the industrial software modeFRONTIER originated by the European project. The software is today a widely used tool in many industrial sectors.

He has published more than 100 papers in refereed journals and proceedings. He has consulted with various companies and international organization including European Commission, EADS, BMW, Electrolux. January 2013, he was appointed a member of the board of the Italian Chapter of INCOSE.