Games in the view of mathematics

We were delighted to host the free UTOPIAE Opening Training School Public Lecture. It was delivered by Jörg Bewersdorff, noted author of Luck, Logic and White Lies, on Thursday 23rd November. 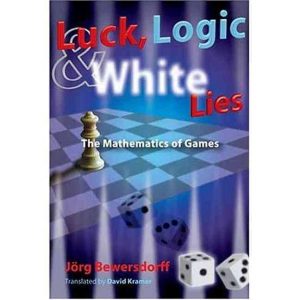 The talk was titled “Games in the View of Mathematics“:
The talk on a level of popular science gives an overview on the mathematics of games, especially games of chance. In history games of  chance inspired mathematicians like Cardano, Fermat, Pascal and the Bernoullis to look for laws of randomness. The mathematics of Monopoly and Blackjack were explained through interactive presentations.

Following the talk there was a lively and interesting question and answer session.

The lecture was used as the basis for the award winning The GIST Magazine (Glasgow Insight into Science & Technology) to produce a podcast, which included an interview with Jörg Bewersdorff.

The podcast can be listened to on the GIST website, and is also available for download here:

Jörg Bewersdorff is a German mathematician who is working as mathematics writer and game designer. After obtaining his Abitur from the Werner-Heisenberg-Gymnasium in Neuwied, Bewersdorff studied mathematics from 1975 to 1982 at the University of Bonn. In 1982 he submitted his diploma in mathematics in Bonn and in 1985 he received his doctorate there under the supervision of Günter Harder.

In 1985 Bewersdorff started a career as game designer. Since 1998 he is general manager of subsidiaries of the Gauselmann AG. He is author of four textbooks dealing with probability theory, mathematics of gambling, game theory, combinatorial game theory, Galois theory, mathematical statistics, JavaScript and object-orientated programming.